I’m hot for the Paleo

Paleostatistics?  Oh yeah, I’m as giddy as a priest on Sunday!

I love geochemical evidence yo!  I swoon at the thought of molecular phylogenetics, aka molecular systematics.  Molecular phylogenetics is the use of the structure of molecules to gain information on an organism's evolutionary relationships.  Oh such joy the paleosciences bring to my life:
Paleoecology uses data from fossils and subfossils to reconstruct the ecosystems of the past.

Palaeohydrology deals with the study of the ancient movement, distribution and quality of water throughout the Earth.

Paleobotany deals with the recovery and identification of plant remains from geological contexts.  And we all know how much I love the geology!

Paleoxylology is the study of fossil wood.

Paleopalynology deals with the study of ancient pollen and spores.

Paleoclimatology deals with history of Earth's climate and the mechanisms that have changed it.

So much ‘paleo,’ so little time!

Email ThisBlogThis!Share to TwitterShare to FacebookShare to Pinterest
Labels: Paleo

American Indians lived in the canyon 300-800 years ago and left rock art which is visible on the canyon walls. Geologically scenic Vogel Canyon is a tributary of the Purgatoire River drainage.

The sedimentary layers of rock at Vogel Canyon indicate that this was a lake basin in the past. Alternating layers of tough, light grey limestone and soft, dark grey shale. The limestones are erosion resistant while the shales are easily weathered and crumbled, allowing the river to undercut the limestone beds and causing limestone slabs to collapse into the river.

The shales represent accumulations of mud in the ancient lake itself whereas the limestones represent accumulations of coarser, sand-textured sediments along the lake shore when water levels were low. The shales contain fossilized remains of algae, snails and tiny crustaceans known as "seed shrimp" and "clam shrimp." All of these species are common in quiet, shallow lakes. In contrast, the limestones contain impressions of large plant stems, dinosaur bones, trampled clams, scattered fish bones and lots of tracks. The limestones are also marked by ripple marks (caused by wave action) and by ooids (tiny, limey spheres) caused by wave action in shallow water.

This evidence supports the conclusion that the lake level fluctuated on a seasonal basis and also on longer term cycles covering decades and even centuries. The lake itself was probably 20 to 30 miles in diameter, shallow but with potable water most (if not all) of the time, and inhabited by a large variety of healthy flora and fauna of snails, algae, crustaceans and fish. The margins of the lake were partly or totally vegetated, the mud inhabited by clams and the whole area frequented by several types of dinosaurs. All in all, there's clear evidence of at least six times when dinosaurs visited this part of the shore of that ancient lake.

I pride myself on my 50 word theatre biographies:

Russell A. Dale - hopped off the plane at D.I.A. with a dream and a cardigan, this enigma-posh hobo scientist, oft dressed in shabbily best glad rags, enjoys biscuits, gravy, long walks of geology, writing, temporal experimentation and cognitive archeology. He's thrilled grateful to be surrounded by such wonderful talent on/off stage. 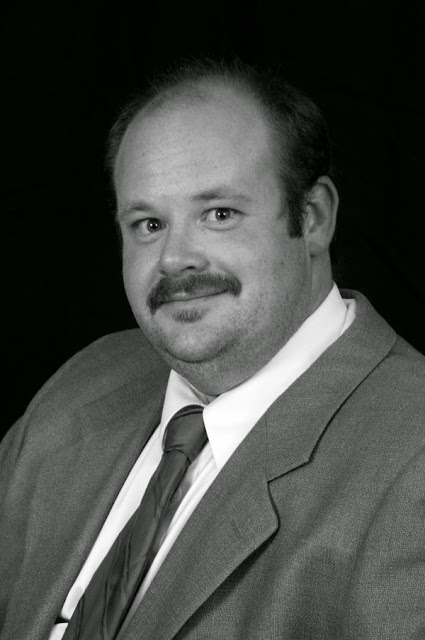