Five deposits of volcanic ash have been located and sampled in Pratt County.
--
Have you ever rolled around in the dirt just because it’s there?  Ever wonder where that dirt came from?  Me too!

Greetings.  I'm Russ Dale. I’m not new to Pratt Kansas as I am “from” Pratt in a cosmic sense, as my great-great grandfather Whitney Bailey arrived in the county in 1887 at the age of 15.  He was a wheat farmer in McPherson and Saratoga Townships.

I enjoy learning about the past. I am a history buff who is heavily interested in genealogy and geology.  And I roll around in dirt.

I was at the Pratt County Historical Museum one day pouring over historic maps of the county.  Wallowing in a pile of old maps is how I roll.  Pratt County landmarks like Skunk Johnson’s Cave, Pilot Knob and Arrowhead Hill made my imagination whirl.  Fascinating.

Then something called “Volcanic Ash Pit” caught my curiosity.  The tiny drawing on this aged 100-year-old map was akin to a modern orbital satellite photo of the fictional Sarlacc pit, the Great Pit of Carkoon, in “Star Wars Episode VI: Return of the Jedi!”  A nerdy rock hound from Colorado, a geologic paradise in its own right, I am in love with rocks and the stories they tell.  And, being a dirt flounderer, I immediately knew I needed to find out more about this pit.  Who doesn’t like to visit pits?  Pits are exciting.  Pits are amazing.  If I had a nickel for ever pit I’ve visited I would have a gaggle of nickels.

I scoured over satellite imagery of Pratt County in search of the pit.  I searched the internets.  I spoke with local old-timers.  I became obsessed with this mysterious oddity.

A friend of a cousin’s cousin made me privy to an enigmatic area called the “silica pit,” a place in the county where generations of children played in the dirt.  Corroborating this first-hand knowledge with information gleaned from a 1973 Kansas Geological Survey Bulletin #205 and a thesis about the “chemical fingerprinting” of volcanic tephra found in Kansas by Brian T. David of Kansas State University, I was pointed to what I believed was the “Volcanic Ash Pit.”

I went there.  All of my pit dreams came true.

My eyes did behold the majesty of the “Volcanic Ash Pit!”  It was an old pit with layers of volcanic ash 14 feet thick along the walls!  The ash, essentially fine shards of white to grey glass spewed from a volcano, was once excavated from the site and used in concrete for roads.  Others uses for “silica” included soaking up blood at meat packing plants and in bathroom cleansers.  Long abandoned, this pit was now just a hole in the ground inhabited by animals and plants.

Where did this “dirt” come from?  The ash, from an erupting volcano, was carried by winds over Kansas many years ago and settled to the ground.  Streams washed the ash into shallow depressions.

Could this Pearlette ash bed be Lava Creek B Tuff of the Yellowstone Caldera, the last major eruption from the Yellowstone volcanic center 640,000 years ago?  Was it derived from the explosion of Valle Grande Caldera supervolcano in north-central New Mexico roughly 1.2 million years ago?  That was a time when humans were an endangered species!  I am filled with questions.

The debate is still out on the origin of the ash and where it fits on the geologic time scale.  Regardless of its origin, it is a superb geologic site.  Especially for Kansas.  It is doubly superb it exists in Pratt County Kansas.

My mission complete and personal dirt quota satisfied, I prepared for another learning adventure into the surrounding area in which my ancestors, and myself, call home. 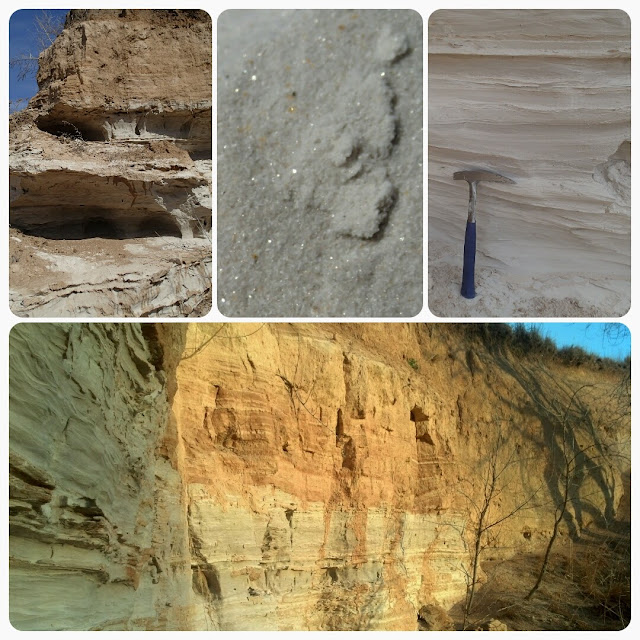 The Soppy, a delicious meat sauce, has been in my family for generations.  Soppy is great on steaks, chicken, fish, turkey and even pheasant.

The Soppy ingredients are a well kept Bailey family secret.  My great-great grandfather on my mother’s side, William Rutledge Bailey, born November 10, 1846 in Knox County, Ohio, first threw down the Soppy on a massive hog he was cooking over a freakishly large fire pit at his prairie homestead in Pratt Kansas.  William slathered the hog with the Soppy and his wife Lucy and the Bailey children William, Whitney (my great grandfather) Henry, Oliver, Florella and Judson feasted on the flavorly enhanced meat.

Whitney never forgot the Soppy ways.  Whitney grew to be a wheat farmer.  Pioneer settlers had a way of making play out of hard work.  One of the big social events of the year in Saratoga Township, Pratt County, was the time of butchering when several families helped each other as they went from farm to farm to work.  In the coldest part of the winter, neighbors gathered and several hogs were butchered, enough to supply the year’s meat.  Many of them were specialists in some phase of the work and Whit Bailey was one of the best butchers in the area and much in demand.

With the Soppy powers on his side, he was bound to be a legend.

Demonstrated here is Soppy use while grilling beefy kabobs and bratwurst.  Soppy glaze is still used for special occasions in my family.  Soppy. Soppy!  SOPPY!

I will never tell the recipe. 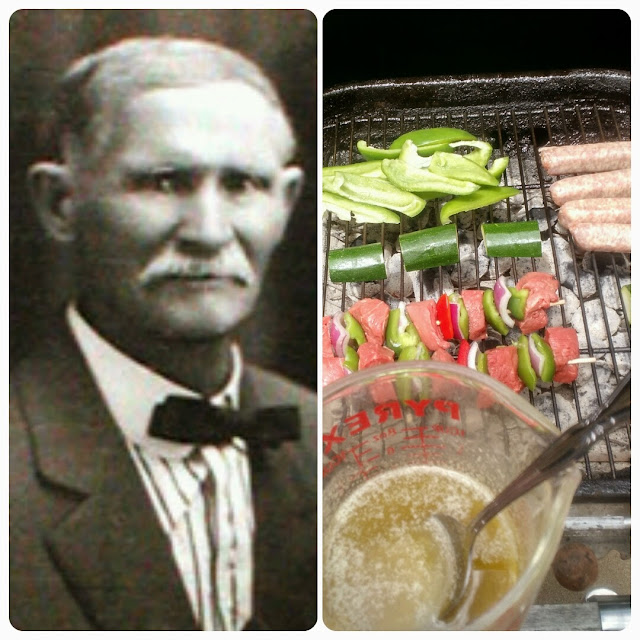 Broken trees at Observatory Park due to the Mother's Day winter snow storm that brought heavy wet snow and winds to Denver. 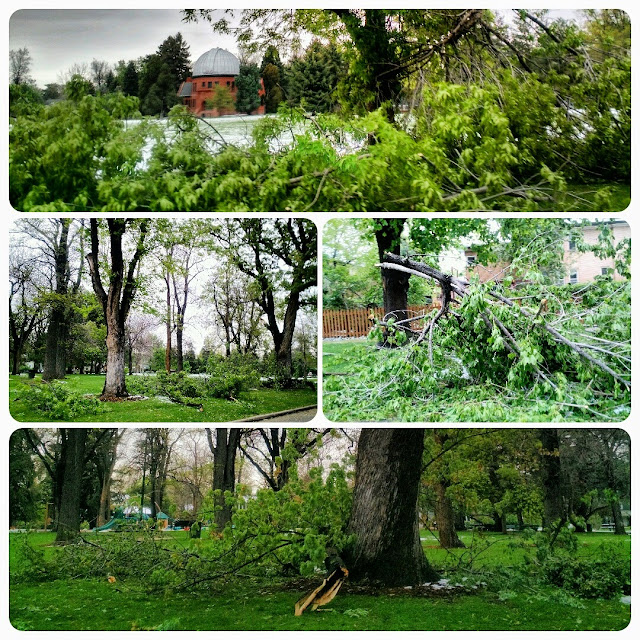